The mighty RS-370 Polyphonic Harmonic Generator can be used as a digital 6-voice additive polyphonic synthesizer and/or as a six-voice polyphonic MIDI/CV/Gate interface. 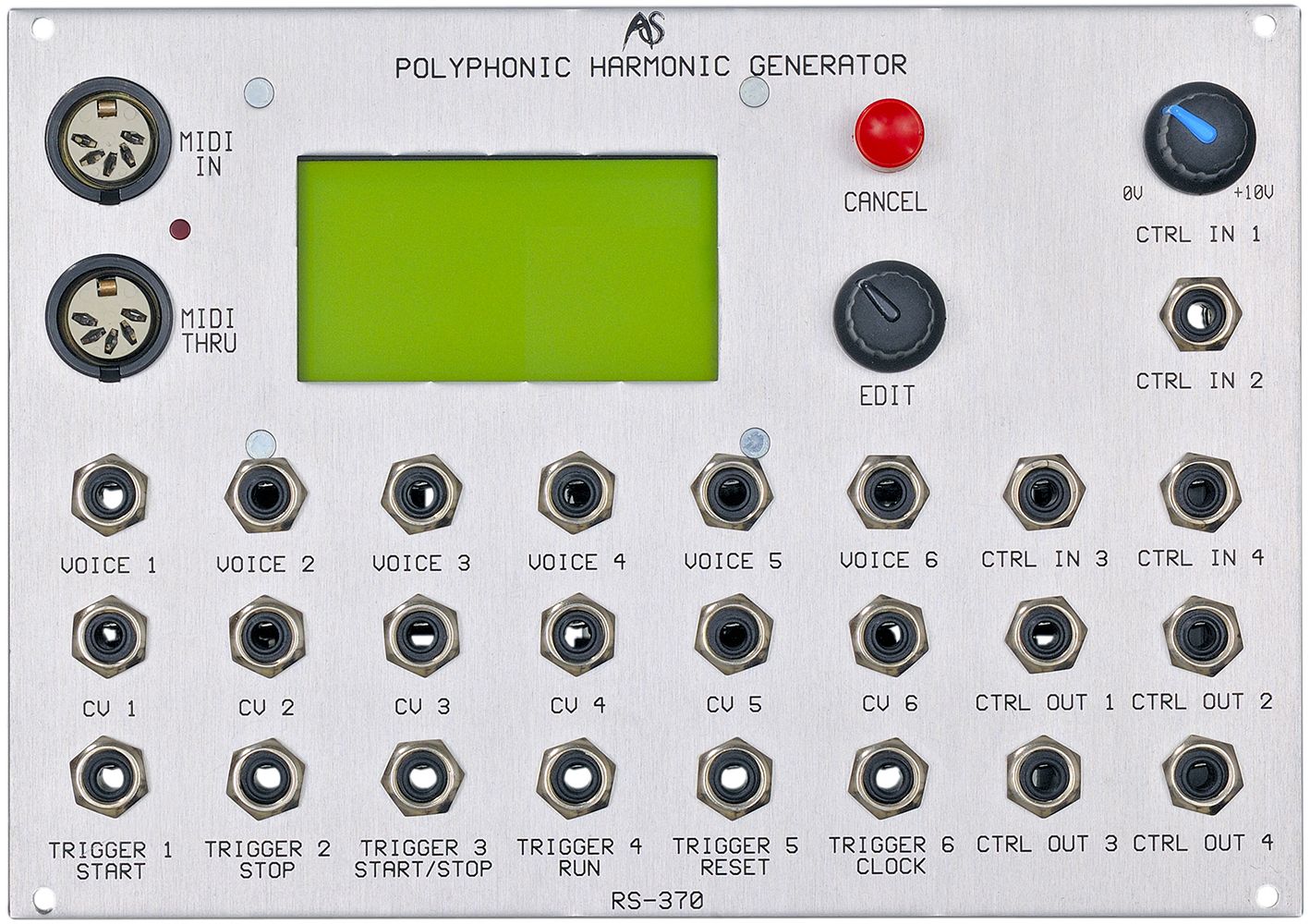 The RS-370 v3 - which can be differentiated from its predecessor by the second line of annotation under the bottom row of sockets (START, STOP, START/STOP... and so on) is an updated version of the original RS-370, with more facilities, a full implementation of wavetable synthesis, and an improved selection of factory sounds. The principles of its operation are identical to those of the original RS-370, but the menu structure is significantly enhanced, so this chapter describes its operation in full, rather than attempting to 'bolt on' the new menus and commands to the information contained in the previous chapter.

Note: All versions of the RS-370 can be upgraded to v3.x capabilities by a simple firmware update

Imagine creating dozens of similar waveforms and placing them in some sort of order in digital memory. Now imagine that you can tell a sound generator to use any one of these waveforms as the basis of a sound, or even to sweep backward and forward through the memory, using one waveform for a fraction of a second, and then the next, and then the next...

The memory that contains the waves is called a "wavetable", and when you create sounds by sweeping through the table, the result is called "wavetable synthesis". This has existed since the late 1970s, and reached its zenith in the mid-80s in the form of the PPG2.2, a synthesiser that delivered a whole new palette of brittle and glassy sounds that had never been heard before. By adding fifteen new wavetables and menu 2.1.10 (Morph table) to the RS-370, it has become a true wavetable synthesizer as well as an additive synthesizer, and is now capable of a huge range of PPG-esque sounds, and many more besides.

Even if you have already owned and used an earlier version of this module, perhaps obtaining this version as a firmware upgrade, you should investigate the new capabilities thoroughly. The enhanced RS-370 is a completely new synthesizer!

INTRODUCTION TO THE RS-370 FAMILY

The RS-370 is a self-contained digital synthesizer that runs on a TMS320VC5412 digital signal processor. It offers multiple modes of operation and can connect in a variety of ways with your analogue synthesizers and MIDI-equipped systems. It is also a powerful MIDI to CV converter that you can use independently of the internal sound generator.

To make sense of the RS-370, let's start by looking at the sound generator itself:

Many additional features help you to obtain the most from the sound generator. These include:

You can control all of this using analogue CVs and MIDI controllers. Furthermore, you can use the CTRL outs to control external modules and synthesisers as well as the internal sound generator.

You should hook up your RS-370 so that you can obtain sound from it before you begin to experiment with the commands and controls described in this chapter. Follow the instructions below. This will help you to obtain a full grasp of the module as you work through the menus.

Note: Some of the factory patches are monophonic, so do not panic if your RS-370 appears only to produce a single note. Select an alternative patch, and all should be well

Before starting, it's important to understand that the RS-370 offers four modes of operation, and that the menu structure may differ slightly depending on which mode is selected.

You can split the modes into two groups: polyphonic, and real-time:

The RS-370 is controlled by the menus displayed on its graphic LCD.This display is backlit to aid its use in darkened conditions.

The menu hierarchy of the RS-370 is quite extensive, so we rationalise it by thinking in terms of a major heading, followed by sub-menus, sub-sub-menus, and so on. When you press one of the options in the start-up screen, you will enter one of the menus as follows:

In most cases you will now have the option to select further sub-menus that we refer to as "menu x.x". For example, if you press EDIT to enter the "Synthesiser" menu, and then press EDIT again to select the "Voice outputs" sub-menu (which is the first item in the list), you enter menu 2.1. This in turn offers sub-sub menus, which are numbered 2.1.1... and so on.

A bit of advice...The RS-370 is a powerful module, so you may find it a little daunting at first. Nonetheless, it is remarkably simple to use once you have come to grips with the menu structures. Experiment freely, as this is the best way to learn the system. If you need help, please email Analogue Systems for support.

Below are six tracks which showcase the capabilities of the Analogue Systems RS-370 Polyphonic Harmonic Generator. These soundscapes were created by Bakis Sirros of Parallel Worlds. All were done in real time with no multitracking.

Running Out Of Time

Running Out Of Time 2