Genuine Ems trapezoid generator featuring Attack, On, Decay, Off and Trapezoid output level. With v.c of Decay time, status led, Sig in and Sig out, Gate in and Outputs A and B this classic timing generator when used with RS-500e captures the essence of the VCS3 and Synthi A. This module is made under license from EMS. 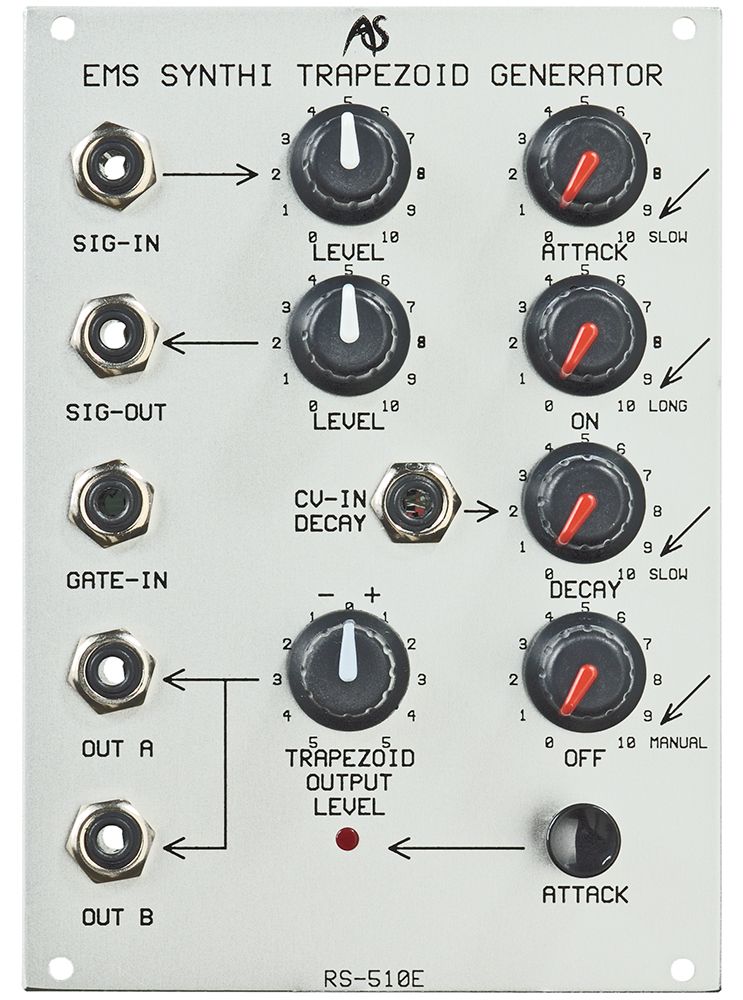 The combined contour generator and VCA used in the EMS VCS3 and various Synthis (the "Shaper") is a very clever piece of electronic design, and it allows you to create sounds and effects that are all but impossible on more conventional synthesizers.

The RS-510e incorporates both elements of the VCS3 Shaper, comprising two modules that would often be found as separate modules. The first of these is the envelope generator itself, referred to as the Trapezoid Generator. The second is a VCA. We will deal with each of these in turn.

The Background to the Trapezoid

The Trapezoid Generator was perhaps the most confusing module within the VCS3 and Synthis, largely because it acted in an unusual way that was not intuitive to users of other manufacturers' instruments. In retrospect, it's hardly surprising that players considered it arcane and impenetrable, but this is unfortunate, because it is a flexible and powerful tool.

This has four stages, as follows:

A: The Attack stage determines the speed at which the voltage achieves its full value.

D: The Decay determines the speed at which the voltage drops until it reaches...

S: The Sustain Level, the level the voltage maintains while a Gate is detected, and ...

R: The Release, which determines the speed at which the envelope voltage decays back to zero after the Gate is released.

(For more information about the standard ADSR envelope generator please refer to Appendix 3.)

The Synthi Trapezoid also comprises four stages, but these are called Attack, On, Decay, and Off. It works as follows:

A: When a Gate is detected, the contour enters its Attack phase, like a conventional ADSR. If the Gate is very brief (a trigger)the Attack is completed nonetheless, and the contour moves to the next stage...

ON: After the Attack, the contour is "ON", and maintains its maximum voltage for as long as the Gate is present. Once the Gate is removed the contour remains ON for an additional time determined by the ON control.

D: At the end of the ON period, the contour decays to zero.

A: From its initial state, the contour enters its Attack phase.

ON: After the Attack, the contour is "ON" for a time determined by the ON control.

D: At the end of the ON period, the contour decays to zero.

OFF: Once the decay is complete, the contour remains at zero (i.e. "OFF") for a period determined by the OFF control, and then enters the Attack phase again.

The RS-510e Synthi Trapezoid Generator generates a four-stage A/ON/D/OFF voltage contour that varies from -5V to +5V, and back to -5V again. (The shape described by the Attack, On, and Decay stages is known geometrically as a trapezoid, which leads directly to EMS's use of the term.) The envelope can be attenuated and inverted if desired.

Note: If you are not already acquainted with the EMS Shaper, please set the "OFF" knob to its most clockwise position, labelled "MANUAL" before continuing to investigate the properties of the Trapezoid Generator.The reason for doing so will become clear as you work through the rest of this section.

The Trapezoid is generated when the module receives a gate pulse of approximately +3V or greater at the GATE-IN.

With the OFF control set to MANUAL, the Attack is initiated upon receipt of a Gate or a Trigger at the GATE-IN, and the trapezoid voltage will rise from -5V to +5V in the time determined by the ATTACK knob. The minimum attack time is approximately 2ms. The maximum is approximately 2 seconds. This is significantly less "snappy" than the fast envelopes produced by the RS-60 Envelope Generator, so sounds controlled by the RS-510e can often have a different character to those produced using other contour generators.

This determines the time that the trapezoid voltage will remain at its maximum after the completion of the Attack and once the Gate pulse is removed. The maximum ON time is approximately 4 seconds.

The decay phase follows the ON stage. During this, the trapezoid voltage will fall from +5V to -5V in the time determined by the DECAY knob. The minimum decay time is approximately 3ms. The maximum is approximately 25 seconds.

The OFF knob performs two functions:

MANUAL: When set to its maximum clockwise position ("MANUAL") the OFF knob allows you to play and use the trapezoid as a contour generator, whereby each Gate pulse initiates a fresh A/ON/D cycle.

Note 1: The trapezoid does not "reset to zero" when a new Gate is detected. If the trapezoid is in the ON or DECAY stages when the new Gate arrives, the Attack will be initiated from the voltage at that moment.

Note 2: Unlike a conventional ADSR contour generator (which will immediately enter its Release phase once the Gate is removed) the trapezoid will complete its A/ON/D cycle, no matter how brief the Gate/Trigger.

If you set the ATTACK to a non-zero setting, ON to zero, and DECAY and OFF to zero, the output waveform will be a ramp wave. Other settings can generate triangle waves, sawtooth waves, skewed triangle waves, square waves, pulse waves and... various shapes of trapezoid waves.

You can modulate the Decay time by presenting a positive or negative CV to the CV-IN DECAY input.You can use this to change the shape and frequency of the waveform when the Trapezoid is repeating, thus creating a huge range of complex waveforms that are particular useful when used as complex modulators for other modules such as oscillators and filters.

The ATTACK button allows you to trigger the trapezoid manually, whereupon it will pass through the Attack phase and hold the voltage ON until the button is released.

The red LED gives you a direct visual indication of the voltage being produced by the trapezoid:

•When the LED is extinguished, the trapezoid is OFF.

•As the LED becomes brighter, the trapezoid is passing through the Attack phase.

•When the LED is at its brightest, the trapezoid is ON.

•As the LED dims, the trapezoid is passing through its Decay.

Remember that a bright LED does not necessarily imply a +ve output voltage, because the trapezoid can be inverted using the OUTPUT LEVEL CONTROL.

Note: The voltages produced by the Trapezoid Generator may differ depending upon the triggering method(GATE-IN, free running, or ATTACK button) and by the positions of the A/ON/D/OFF controls. This is normal, and a consequence of the idiosyncrasies of the EMS circuit designs.

Amplifiers have a simple job - they amplify or attenuate the signals presented to them. Voltage controlled amplifiers (VCAs) are more sophisticated... they allow you to control the amount of amplification or attenuation by applying a voltage to a CV input. VCAs exist in every synthesiser that can shape a sound. For example, you may think that it's the envelope that is changing the volume of a sound, but it isn't. The envelope is producing a CV that, when applied to the VCA, causes it to modify the signal passing through it. The VCA is one of the fundamental modules that allow us to make sounds develop over time.

The RS-510e incorporates an integrated VCA with user-controlled signal input and output levels. However, it has no external CV input. The voltage is provided directly by the Trapezoid Generator. This means that signals presented to the SIG-IN of the VCA will be amplified by the instantaneous Trapezoid level.

The RS-510e VCA offers one signal input, SIG-IN and a single output, SIG-OUT, each with an associated LEVEL control.

Note 1: The position and polarity of the TRAPEZOID OUTPUT LEVEL control does not affect the voltage applied internally to the VCA.

Note 2: The VCA is designed to modify audio frequency signals. If you present a low-frequency signal to the input, it will be severely attenuated at the output.

Lead is a 2 oscillator patch using the RS-500e EMS filter and the RS510e Trapezoid, some echo added externally.

The lead patch also uses the RS-500e with the RS-510e trapezoid, played by hand.


From Putney with love