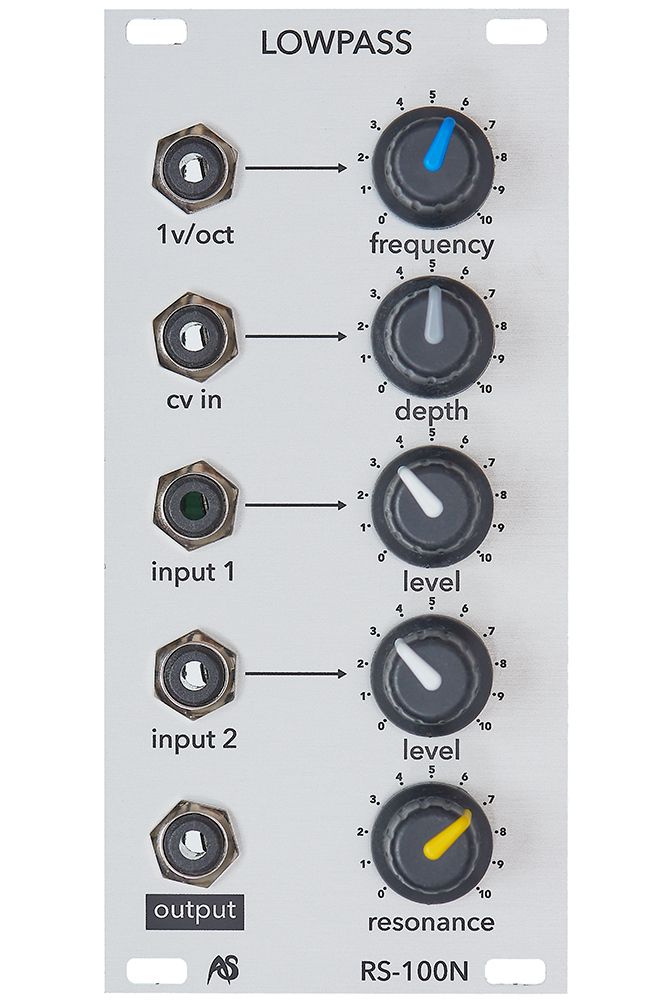 Filters are the means by which we modify sounds to create new sounds. The most common way in which they do this is by removing parts of the audio spectrum - attenuating the low frequencies and/or the high frequencies, or maybe by creating 'holes' in the spectrum. Other types of filter may enhance parts of the spectrum, or they may act in the time domain, removing sections of the signal rather than modifying its frequency response.

The most common filter in analogue synthesis is called the low-pass filter and its name exactly describes its function: it passes the part of the spectrum below its cut-off frequency, but attenuates those frequencies that lie above the cut-off frequency.

The most highly revered low-pass filter in analogue synthesis was developed by Dr Robert Moog in the late 1960s. It first appeared in the modular Moog synthesizers of that decade, but its finest hour came in 1970 with the appearance of the Minimoog. Largely because of its filter, this rather limited instrument has remained the standard by which all others are measured, and has survived nearly 40 years with its reputation intact as the most desirable of all integrated monophonic synthesisers.

Moog's filter used a circuit called a ladder network. In itself, there is nothing special about this, and many other filter designs are capable of emulating its response. However, Moog's circuit was flawed because it exhibited a small amount of distortion. Many engineers would have sought to correct this but those at Moog Music did not, perhaps because they recognised that the sound was musically pleasing. Indeed, if a synthesiser sounds like a Minimoog, it is called "warm" or "creamy". If it does not it will often be referred to as "thin" or "uninspiring".

The RS-100S 24dB/oct low-pass filter imitates the Minimoog's filter and exhibits almost identical characteristics in both the frequency domain (i.e. what it does to audio signals) and the time domain (i.e. its response over time to CVs). Below the cut-off frequency the response is approximately flat down to DC. With the filter fully open, it will pass signals approaching 20kHz.

You can control the cut-off frequency (Fc) using the FREQUENCY control. In its fully anticlockwise position, Fc is approximately 30Hz. As you rotate the knob clockwise Fc will increase until, it its fully clockwise position, it exceeds 15kHz. These extreme positions are called 'closed' and 'open' respectively.

You may also control Fc using one or both of the CV inputs:

The RS-100N has variable resonance, or 'Q'. As this is increased from its minimum, the filter will accentuate Fc, and progressively attenuate frequencies below Fc as well as those above it. As the resonance is increased further, the RS-100N will exhibit the aggressive 'ringing' associated with Moog filters, and it will severely colour any signal passed through it. At the highest Qs, the filter itself will begin to oscillate, and even in the absence of any signal presented to its inputs it will then act as a sine wave generator, the frequency of which is Fc itself.

You can control 'Q' manually using the RESONANCE control. In its fully anticlockwise position, Q is approximately zero, and there is no emphasis of the signal at Fc. As you rotate the knob clockwise Q will increase until, it its fully clockwise position, the filter produces a sine wave of frequency Fc.

There is no voltage control of Q.

The RS-100N has two inputs: SIG 1 IN and SIG 2 IN, each with an associated LEVEL control. The inputs accept signals in the range ±10V, and these signals are mixed so that they can be filtered simultaneously.

The LEVEL controls offer unity gain in approximately the 2 o'clock position, marked '4' on the panel.

There is a single output that carries a signal in the range ±10V.

Some complex FM patching using 3 x RS-95 and the RS-100 filter modulated by an LFO.

... is an RS-100 with resonance fully up, cutoff modulated by an envelope, various envelope settings.