Ideal alternative to RS-220 joystick controller for Demon or Sorcerer keyboard systems or as a module in its own right in a modular set up. Backlit clear wheels which change colour as they move and the modulation wheel LED flashes with intensity as it is moved showing the internal LFO frequency. 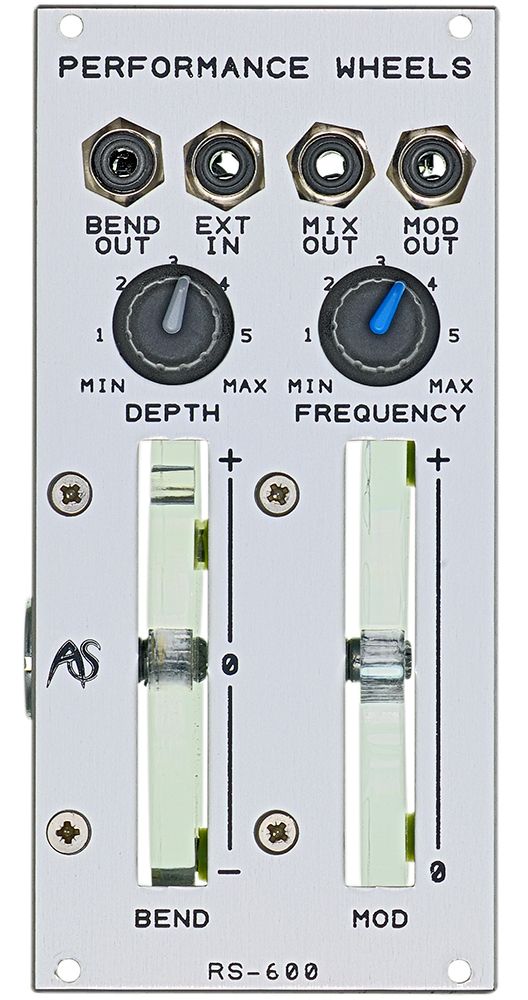 In the earliest days of electronic audio synthesis, many devices were designed and discarded in a search to find the ideal controlling mechanism for the new generation of sound generators. Some, like Don Buchla's pads, found favour only among the avant-garde, and these were not much liked by the vast majority of musicians. By far the most popular mechanism was the traditional keyboard found on instruments such as pianos, organs and harpsichords. This was easy to implement as an electronic controller, and offered many advantages to the player, not least of which was that a huge range of sounds could be played from something that looked and felt like a known instrument.

Nonetheless, the early electronic piano-style electronic keyboards had significant limitations. Unlike instruments such as trumpets and flutes (which allow the player to change the timbre and loudness, and add effects such as vibrato during the course of a note) their keys were simple on/off switches.It wasn't just that they lacked additional control mechanisms;with no velocity- or pressure- sensitivity, they had no mechanisms that allowed players to affect the timbre and modulation of sounds as they were played, or once they had been played. Of course, these were not new limitations: pianos' keyboards control the velocity of the hammers to increase or decrease the loudness and brightness of notes at the moment of impact, but have no way (for example) to add vibrato after a note is played. On the other hand, all the notes on an electronic organ have the same loudness and timbre (for a given voicing), but the player can add effects such as vibrato and chorus by toggling the appropriate switches.

In the 1960s, engineers such as Bob Moog and Alan Pearlman (whose instruments were to become far more successful and widely adopted than Buchla's) were aware of these limitations, and sought to design mechanisms that would allow players to choose what effects might be added to a sound, and to what degree.A number of ideas were tried, but one became a standard that exists to this day: a piano keyboard plus two control wheels adjacent to each other to the left of that keyboard, one of which bends the pitch of a note upward or downward, and the other of which controls the level of some form of modulation - typically vibrato, tremolo or wah. This configuration of Pitchbend and Mod wheels was introduced to the mass market in 1970 on the Minimoog and, because it was an excellent solution to the problem of adding performance capabilities and human qualities to a bunch of otherwise soulless switches, it has remained the standard for analogue synthesisers ever since.

The RS-600 offers the classic, dual-wheel controller configuration, but adds a number of facilities that take it beyond the relatively simple concepts of pitchbend and modulation amount. Most importantly, it incorporates its own low frequency oscillator, so you can add modulation using the MOD wheel without tying up an LFO module. It also offers an external input, so you can use the MOD wheel to control the amplitude of any signal passing through the module. This might be another modulation source, but it could just as easily be an audio signal, at which point the wheel becomes a signal level controller. In addition to this, the BEND wheel has a dedicated depth control and independent output that allow you to use it for many duties other than pitch bend. Finally, a MIX output allows you to sum the internal LFO (or external signal) voltages with the offset generated by the BEND wheel, for advanced effects.

Determines the rate of the internal LFO, in the range 0.15Hz - 45Hz. The internal LFO frequency is displayed by the flashing of the MOD wheel illumination.

Accepts an audio signal or CV. Inserting a cable into the EXT IN socket disconnects the internal LFO from the module outputs.

Outputs either the signal presented to the EXT IN or that generated by the internal LFO after attenuation by the MOD wheel.

Determines the range of DC voltages generated by the BEND wheel. At its minimum setting, no voltage is generated, whatever the position of the wheel may be.

Outputs a DC voltage determined by the positions of the BEND wheel and DEPTH control. The range is±2V.

Outputs the sum of the BEND OUT (in an increased range ±4.5V DC) and the MOD OUT (in the range 0V to +2.5V AC). This allows you to introduce DC offsets to other CVs and audio signals. One use of this would be to generate the positive-only vibrato of a guitar. There are many others.