High-quality joystick controller with two outputs and one attenuator per axis. 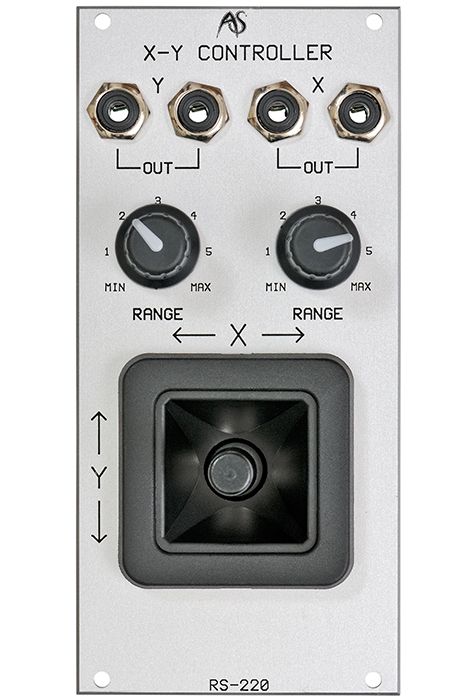 Nowadays the synthesiser is almost always considered to be a keyboard instrument, much like a piano or an organ. This is a view that is as much a consequence of modern synthesiser design as it is a necessary part of that design. In other words, we think of synths as "keyboards" because that is how they are presented, not because there is any fundamental reason why they should be so.

Of course, an analogue keyboard is merely a controller that generates different voltages for each of the keys pressed. This is a simple way to create the discrete voltages that relate to the common musical scales of western music. But there are many other ways to control synthesisers. Most synthesisers will have auxiliary controllers such as pitch-bend and modulation wheels, some will feature ribbon controllers, and others might offer pressure sensitive pads. But all of these additional controllers share a common limitation: they only output a single control value at a time. So, no matter how many destinations your wheel, ribbon or pad controls, the same information is sent to each.

Strangely, there is an auxiliary controller that was known to all the early synthesiser designers, and which was incorporated in most synthesisers throughout the 1960s. But, after the release of the Minimoog and ARP2600 in 1970, this controller fell into disuse, with only sporadic re-appearances on unusual instruments such as the Korg Sigma. Yet it remains an intuitive, creative and straightforward way to make sounds change in two independent ways at the same time. This controller is the simple joystick.

The RS-220 uses a very high quality self-centring X/Y joystick mechanism that provides smooth response across its full range. (You can remove the internal springs to allow for non-centring action, if desired.) It provides two outputs for each CV generated.

The RANGE controls offer this fine control, reducing the output CVs to approximately 0V at their MIN settings, while passing the full ±5V ranges when set to MAX.

Each axis offer dual outputs with a maximum range of ±5V. Each pair carries identical signals with maximum operational values determined by the RANGE control. (See above).