Distortion module with v.c of drive and wet/dry mix. 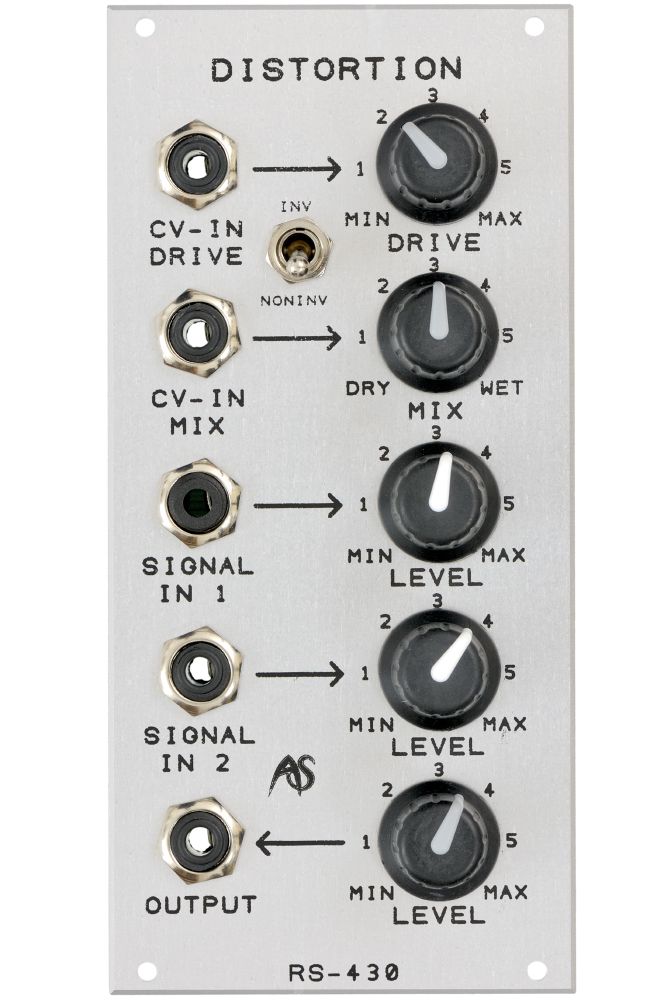 It is a wonderful irony that, while we generally want our initial signal generators and much of the rest of our synthesizers to be as clean and free of distortion as possible, many of the best sounds are generated by adding a touch of distortion somewhere within the signal path.

With some integrated synthesizers a small amount of distortion can be created by overdriving a part of the circuitry - usually the filter input. When this is not possible, it is not uncommon to see keyboard players using valve amplifiers to add 'grit', or even to see guitarists' pedals (stomp boxes) placed between the synthesizer's audio output and the input to the amplifier or mixer. Both techniques can add warmth and interest to an otherwise sterile signal, although using valve amps and fuzz pedals can also extend the effect beyond gentle overdrive into a full-blooded howl (depending, of course, upon the nature and amount of effect applied).

While internal overdrive and/or external distortion may be the limit of what can be accomplished using an integrated synthesizer, these effects can be much more interesting - and used much more creatively - within a modular synthesizer.Distortion is a form of waveshaping, and it is therefore possible to use it within patches to obtain a far wider range of timbres and effects than would otherwise be possible. Furthermore,the ability to use CVs (derived from modules such as contour generators and LFOs) to modify the amount of distortion or waveshaping further extends the possibilities on offer.

With all of this in mind, the RS-430 was designed specifically for use within the signal paths of a modular synthesizer, and it offers a degree of control not found on any stand-alone units. So, in addition to the traditional controls found elsewhere, it offers voltage control over the amount of overdrive, voltage control over the balance of the unaffected (dry) and affected (wet) signals, plus a unique ability to mix the wet signal in phase with- or inverted with respect to- the dry signal.

You can recreate many vintage synthesizer sounds using the RS-430. For example, numerous 1960s and early 1970s timbres may be obtained if you control the amount of overdrive by routing the output from the contour generator driving the audio VCA to the CV-IN DRIVE input of the distortion unit. All other things being equal, the result of this is that the amount of drive is proportional to the patch's audio output level, which (broadly speaking) mimics the relationship between signal level and distortion that occurred in early synthesizer circuits.

The RS-430 may also be used as a conventional overdrive/distortion unit, and it is suitable for use with external signal sources including guitars and bass guitars, to which its warm, analogue overdrive is well suited. If you wish to experiment along these lines, we recommend that you consider using the RS-430 alongside an RS-70 pre-amplifier, an RS-210 or RS-215 eight octave filter, and an RS-80 or RS-85 LFO to provide effects such as tremolo.

The amount of distortion generated by the RS-430 is determined by five interacting controls and CV inputs, and is also dependent upon the levels of the signals presented to its dual audio inputs.

Each of the inputs SIGNAL IN 1 and SIGNAL IN 2 accepts an audio signal with maximum amplitude ±10V. The associated LEVEL controls offer attenuation ranging from -∞dB (total attenuation of the signal) to approximately 0dB (unity gain). After input, the signals are summed and the combined signal then passes along two signal paths: a clean (unaffected) path, and a second through the overdrive circuitry.

When the DRIVE knob is in its furthest anticlockwise position (MIN), little or no overdrive is applied to the signal. Rotate the knob clockwise to increase the amount of drive applied. The amount of drive may also be controlled by applying a signal to the CV-IN DRIVE input, which accepts signals in the range ±10V.

Depending upon the position of this switch, the phase relationship between the unaffected and overdriven signals may be altered.

Note that this switch will have no audible effect if the MIX knob is at its DRY or WET extremes.

The resulting signal is output from the OUTPUT socket. Its level is controlled by the associated LEVEL control and has a maximum amplitude of ±10V.

On this one the kick is routed through the RS-430 distortion and then the RS-40 sample and hold, which is clocked at high frequency by an RS-95 to give sample-rate reduction effects as the pitch of the RS-95 changes.